You Are Here: Research Prof. Wiegand 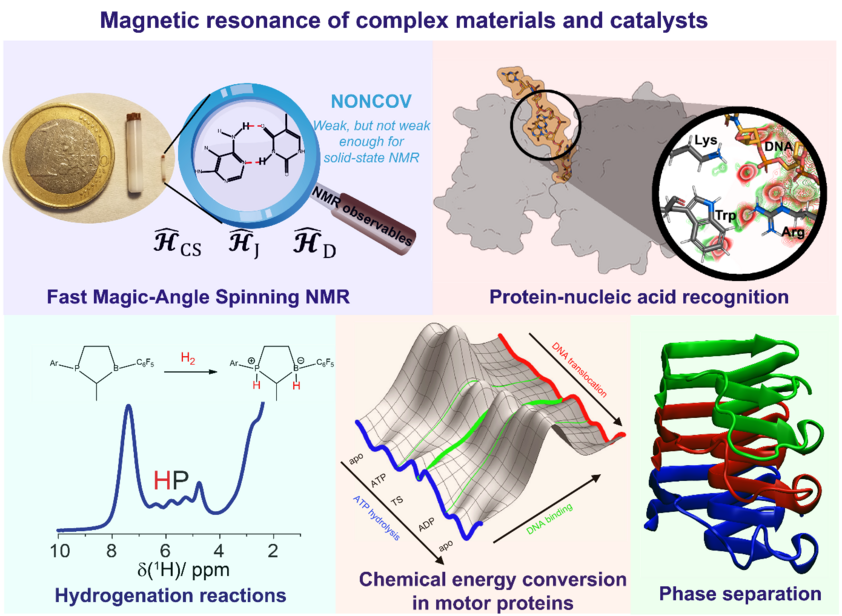 We use magnetic-resonance spectroscopy to study catalytic processes in biology and chemistry and the role of weak noncovalent interactions therein. In particular, we are employing and developing solid-state Nuclear Magnetic Resonance (NMR) approaches with which even non-crystalline systems, such as hydrogels, amorphous polymers, particles on solid surfaces, protein fibrils or large protein-nucleic acid complexes, can be studied. A focus of our research lies on the detection of protons, which often are at the heart of a molecular recognition event initiating chemical reactions or assembly processes. Until recently, however, their solid-state NMR spectra used to be uninformative due to lack of resolution. However, with the significant line-narrowing achieved with the advent of new fast magic-angle spinning (MAS) techniques (MAS frequencies larger than 100 kHz) the protons engaged in various types of noncovalent interactions (hydrogen bondings, π-π- or hydrophobic interactions etc.) can be resolved and identified. We interpret our experimental results in feedback with quantum-chemical calculations on how NMR observables are influenced by noncovalent interactions.

Our vision is to develop unified concepts in catalysis bridging the gap between biology and chemistry. Our strategies to study mechanisms of hydrogenation reactions include both, fast MAS and Para-hydrogen Induced Polarization (PHIP) experiments. Interesting model systems are, for instance, Frustrated Lewis Pairs that can activate and bind small molecules such as di-hydrogen. In the biomolecular context, we investigate cellular organization by phase separation processes in proteins related to neurodegenerative diseases (e.g. RNA-binding proteins). Liquid-liquid phase separation is an intensively debated concept these days allowing cells to spatially and temporarily regulate biological reactions in subcompartments, such as membrane-less organelles. We are developing the solid-state NMR and Electron Paramagnetic Resonance (EPR) toolboxes to explore the liquid-to-solid transition of proteins and to probe the weak noncovalent interactions driving such processes. Another central research theme in our lab is the mechanism of chemical energy conversion in proteins, for instance in ATP-fuelled motor proteins involved in DNA replication. Here we investigate the binding of nucleic acids to proteins, allowing us to develop models for ATP-hydrolysis and its correlation with protein functionality. The newly established techniques will also allow us to investigate the role of RNA in phase separation events.